Google Apps is undoubtedly one of the best cloud computing application. Since the time Google has launched the Google Apps, it has been embraced by millions of businesses ranging from a partnership firm to big Enterprise. This Google Apps has undergone various changes in terms of features as well as versions and editions. Currently Google Apps is available in various flavors like Google Apps Standard Edition, Google Apps Business, Google Apps Education editions, Google Apps Government editions and Google Apps non-profit editions.

The following image below gives a comparative overview of the features available in both the primary flavors of Google Apps: 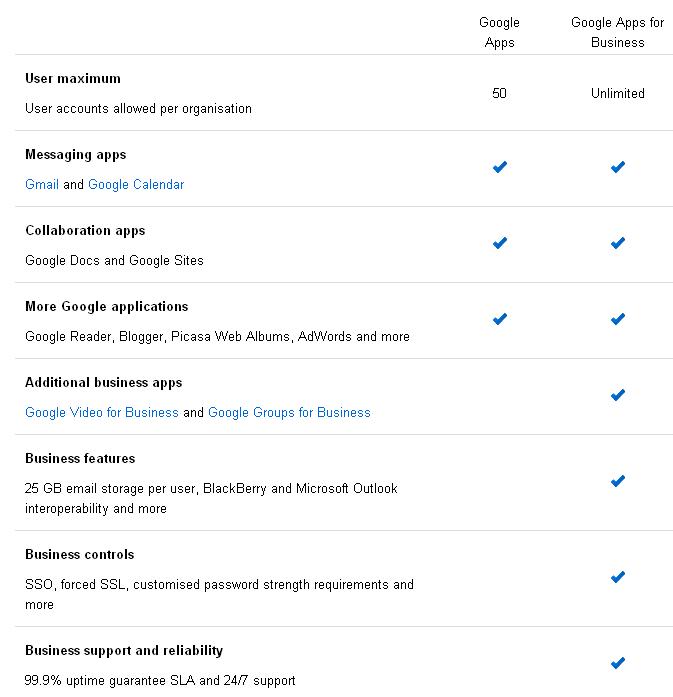 The free version of Google Apps is available to any one for free without much restriction, however it has certain limitations as indicated in the above image. Initially when Google Apps was launched the free edition was available with a user limit of 50 while sign up and later on if you needed more number of users you can easily increase the limit by sending a request with a valid reason to Google. But this was the time when only the free edition was in the market.

Looking at the popularity, Google decided to monetize the opportunity and the business edition was launched. So on 14th January 2009, Google made an announcement to fix the maximum number of users for free edition at 50. That means after the announcement, even if you had a valid reason, you will not be able to increase the number of users beyond 50. Instead Google directed businesses with more than 50 users to the Business edition. Google being a philanthropic company, did not let existing users of free editions down by allowing them to operate with more than 50 users if they had.

Now Google has made another announcement today saying the limitation of 50 users will further be reduced to 10 users starting 10th May 2011. But like earlier announcement the existing users with limitations of 50 users will continue to enjoy the service. So this will only be applicable to users who signs up for a new Google Apps account after 10th may 2011. This the complete mail from Google.

We recently announced upcoming changes to the maximum number of users for Google Apps. We want to let you know that, as a current customer, the changes will not affect you.

As of May 10, any organisation that signs up for a new account will be required to use the paid Google Apps for Business product in order to create more than 10 users. We honor our commitment to all existing customers and will allow you to add more than 10 users to your account for xxxx.com at no additional charge, based on the limit in place when you joined us.

In my opinion this is a best move by Google as any business which needs more than 10 users must be making a good money and need to pay some amount to Google for such a  nice service. But Google should also re-consider about the pricing of Business edition with an altogether different pricing model to suit the small business owners who may need just 15 or 20 users. Please share your opinion on this.

Thanks for the update – 10 user restriction – disappointed as I was evaluating it for a client. The solution will not now work so time and money wasted. Google has lost the business.

I was hoping I could mix Free and Premium accounts but it doesn’t work that way – Google’s loss – and mine.