Facebook seems to have a hard time maintaining the infrastructure to support it’s more than 600 millions users. So in recent time people have started facing many irregularities with Facebook. Even I have experienced a few issues on my own. Issues like the online users section shown at the left side of Facebook showing multiple times or chat windows not opening when you click on  user name seems to be quite common. Moreover there are issues like messages disappearing from wall and Facebook group is a matter of concern.

Facebook Groups. I inquired with other members about the issues and some of them told they are able to see and some reported as not available to them. So it seems to be issues related on per account basis.  Contacting Facebook for such things did not yield any result. So I was ignoring that thinking it will be a temporary issue and will be rectified soon. But today an extremely strange thing happened. I was chatting with the members of one of the group when I tried to post a comment to one of my friend’s status message. It did not get posted and I received an error saying not posted and try again. I tried again, but that also did not result in success. I tried refreshing my page and I was surprised to see the following message instead of my Facebook wall:

Your account is currently unavailable due to a site issue. We expect this to be resolved shortly. Please try again in a few minutes.

I tried refreshing my page numerous times but that did not work and I was greeted with same message. I was suddenly concerned and thought that Facebook has deleted my account or banned me. I tried to access it with another browser. I put my username and password and huh…instead of logging me in, I was greeted with a slightly different message with option to login with a  different user name and password.

Your account is temporarily unavailable due to site maintenance. It should be available again within a few hours. We apologize for the inconvenience. 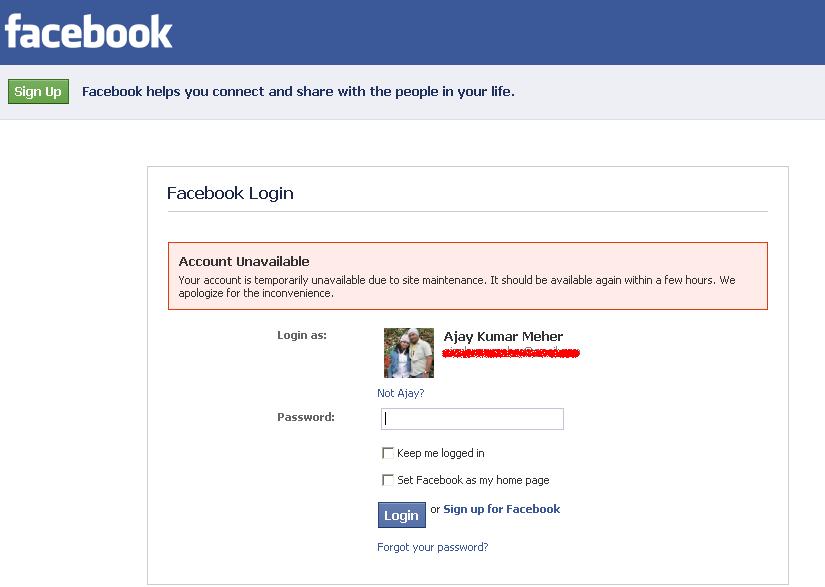 This message looked bit relaxing as I became sure by now that my account has not been banned or deleted. And seems like a Facebook issue.

Such incidents are not new to users and Facebook is aware of it. They told to CNET long back about some internal glitch in their server which is preventing users to access their account intermittently.  But as Facebook is growing like anything and many users and enterprise are heavily dependent on Facebook for their brand promotion and connecting with their customers, such downtime will definitely hamper their business. Facebook should take care of such issues by expanding their infrastructure more aggressively. Also they need to publish any anticipated downtime or issues in a publicly available location.

By the time I am writing this, I tried again refreshing browser and Alas I am inside my Facebook profile. So it was definitely a  temporary glitch. If you had a similar experience with Facebook recently, we would love to know about it. So please share it through comment.